Tahitian traditional dance competition is the island most popular event. It takes place every month of July ; different dance groups come from all over the islands and perform with there most beautiful costumes.

This event takes place every year from July to August.

This centenarian contest starts in 1819, when King Pomare forbade dances and « Heiva » accused to be suspicious activities. The protestant ministers wanted to erradicate every pagan expression. Several laws were voted against the same reason.

Traditional dances came back with the 14th of July celebrations in 1881: The Tiurai allows to reconcile Polynesians with their culture.

This event takes place every year in November.

Small groups, identical in number, can choose their costumes, songs, creation, choregraphy freely. It’s the occasion for unknown groups to gain popularity and fame. The « Tapairu » were young girls that followed the queen. They were chosen for their excellent skills, most notably in artistic expression.

The Museum of Tahiti and The islands 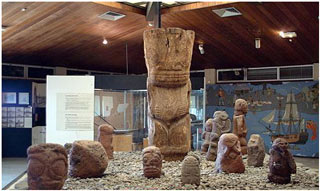 The Museum of Tahiti and The islands located in Punaauia, exhibits collections of the cultural heritage of Oceania.

The Museum collaborates with The Museum of Quay Branly over the internet to promote local exhibitions.

This Canoe race is a world class contest known for being the most difficult. It takes place in the downwind islands. It is a 3 days race starting on the island Huahine through Raiatea finishing in Bora Bora by the 3rd day.